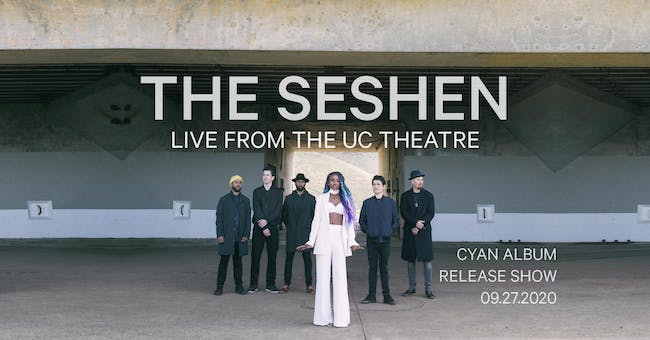 iCal
Google
The Seshen Live From The UC Theatre on Sunday, September 27, at 6PM PST!

The Seshen is a San Francisco Bay Area six-piece band whose songs exist between the lines: in the space between waking and dreaming, ego and collective consciousness, at that blurred horizon where earth meets sea meets sky.

CYAN (February 28, 2020 – Tru Thoughts) is the band’s most vulnerable, compelling work to date. Over a spacious, at times tumultuous sonic landscape that leans on live instrumentation, St. Juste sings of a reckoning: a hero’s journey through confusion and self-doubt, depression, and ultimately forging a way out toward the light. CYAN is a story about saving yourself. There’s death, rebirth, and a chance to look square in the mirror for the first time in a long while. To dive deep in search of a new life—one stripped of pretense or protective armor, for better or for worse.