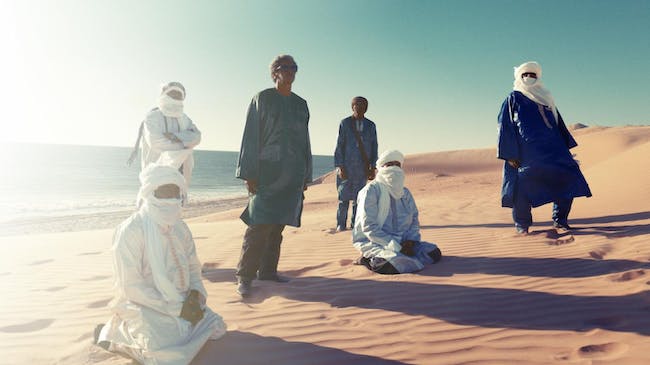 Tinariwen is one of the latest musical phenomena of truly universal calibre, and not an event to miss.

The new album by Tinariwen could well have been called Exile on Main Street. But other people have already thought of that. It also could have been called A la recherché du pays perdu (‘Remembrance of a lost country’). Except that would have been a tad Proustian for musicians who grew up pretty much between a rock and a sand dune, in the midst of their goat herds and camel caravans. But the idea is apt. As is the painful paradox, if you consider that while Tinariwen were busy criss-crossing the globe on their recent triumphant tours (160 concerts played in the past three years), expanding their audience on all five continents, becoming one of the latest musical phenomena of truly universal calibre, the frontiers that encircle their desert home were closing down and double-locking, forcing them into exile to record this their 8th album.

Over the past five years, their beloved homeland in the Adrar des Ifoghas, a Saharan mountain range that straddles the border between north-eastern Mali and southern Algeria has, in effect, been transformed into a conflict zone, a place where nobody can venture without putting themselves in danger and where war lords devoted either to jihad or trafficking (sometimes both at the same time), have put any activity that contradicts their beliefs or escapes their control in jeopardy. Even though the 12 songs on this new record evoke those cherished deserts of home, they were recorded a long way away from them. And, as a result of this separation, at a time when the political, military and humanitarian situation in the region has never been so critical, the feelings and the emotions that the band managed to capture on record have never been so vivid.

In October 2014, making use of a few days off in the middle of a long American tour, the band stopped off at Rancho de la Luna studios in California’s Joshua Tree National Park. The place has become the favoured refuge of the stoner rock tribe. Josh Homme and his Queens of the Stone Age were the first to make it their hive, and since then, whether in use by P J Harvey or the Foo Fighters, Iggy Pop or the Arctic Monkeys, neither the mixing console nor the kitchen ovens have had a moment to cool down. For Tinariwen, the geographical location of the studios – lost in the middle of that horizontal desert, that mineral immensity, where Man is reminded of his own insignificance in ways that can only, in the end, either kill him or sublimate him – proved to be particularly propitious in terms of creativity.

And the human climate was just as favourable. As session followed session, musicians who know the place well dropped by to add their own touch to that pre-industrial boogie which comes from a world where only the essential and metaphysical passions of space and time have any meaning. Such was the case of Matt Sweeny, guitarist of fine pedigree (Johnny Cash, Bonnie Prince Billy and Cat Power) and an avowed fan of the band. Kurt Vile, ex-member of the duo War On Drugs, now spearheading a noisy indi-folk combo, also took part in the debate. As did Alan Johannes, multi-instrumentalist, sound engineer and producer of the first few albums by Queens of the Stone Age, a band with whom Mark Lanegan, the other guest on the album, has also been a singer. From their angle, one might have expected all these contributions to result in something pretty heavy, with those American guitars coming into to reinforce the ishumar (name of the musical style of which Tinariwen precursors) guitars of Ibrahim, Abdallah Hassan and Elaga. In effect, lovers of those sensual yet abrasive riffs that are the band’s signature won’t be disappointed. But neither will those who love the funky, danceable side of Tinariwen, which comes through loud and clear courtesy of bassist Eyadou and percussionist Sarid, a veritable rhythm machine in the mould of Sly and Robbie. All that potential has been wonderfully honed by the album’s mixing engineer Andrew Schepps, who has previously worked with the Red Hot Chilli Peppers, Johny Cash, and Jay Z.

That happy encounter between Tamasheks and rockers was already in evidence back in 2011, with the involvement of Wilco and TV On The Radio on the album Tassili, which was recorded in the depths of the Sahara. It was as if those musicians, coming from their world of high tech, leisure and entertainment, sought to reinvigorate the way they do things by working with artists who have been forced by necessity to reduce everything to its essence, and who bear a different destiny. In that sense, Ibrahim and his tribe restore meaning to an activity which has been partially drained all existential significance. In a cultural environment that has been overtaken by the petty and the superficial, the members of Tinariwen fascinate because they incarnate a salutary break and come across as the ultimate heroes in the midst of an army of fleshless puppets.

Having said that, in M’Hamid El Ghizlane they’re heroes for real, so much so that the youth of the area know how to sing their songs in the same way that people in other parts of the world know how to sing the Stones or Led Zep . It was there, in that oasis in southern Morocco, close by the Algerian frontier, that the band set up their tents for three weeks in March 2016 to record this 8th album, accompanied now and then by the local musical youth in question, or by a local Ganga outfit (a group of Berber ‘gnawa’ trance musicians). The album is called Elwan (‘The Elephants’), not Exile On Main Street, though it fits nicely into that ‘road record’ category nonetheless.

There are road records just like there are road movies. In American cinema, a road movie always unfolds the same way. Characters travel from one place to another in search of some truth, of a future might offer them some kind of revelation. But they always end up reconnecting with their own past, their origins. Of course, it’s an impossible return, because that past, those founding origins have been irrevocably erased. It’s the same for this record, so musically powerful and yet poignant in human terms: every song evokes a land that can no longer be found, a lost world, with all that this implies in terms of emotional range, from nostalgia for a joyous past to the tragic recent loss of a territory, and of the dream that it nourished. The emotional ‘bite’ of that loss imbues some of the songs by Ibrahim, such as Imidiwan n-akal-in (Friends from my country), Hayati (My life) or Ténéré Takhal (What’s Happened to the Desert). It’s in that last song that the famous elephants of the album title make their appearance, an animal metaphor to describe those ‘beasts’, whether militias or multinational consortiums, who have trampled everything in their path: kindness, respect, solidarity, ancestral traditions and the values essential to life in the desert, where both the human and ecological equilibriums are extremely fragile.

But the songs written by Abdallah, such as Sastanaqqam (I Question You), or those penned by Hassan, the deeply disturbing Ittus (Our Goal), also evoke a similar sense of helplessness and disempowerment. The same goes for Nannuflay (Fulfilled), written by Eyadou, one of the ‘kids’ in the band; it’s a song echoes that sense of absolute crisis. Having said that, between the weariness of the old fighters of the Touareg rebellion of the 1990s (Ibrahim, Hassan, Abdallah) and the dynamism of a youth that’s still emerging (Eyadou, Elaga, Sarid, Sadam), you get a wonderfully symbiotic mix. The meeting of two such disparate generations in one band is relatively rare in today’s musical world. In Tinariwen, it’s a meeting that celebrates, even more powerfully might otherwise be the case, the capacity of music to make experiences as intense and cruel as exile beautiful and, in some ways, even attractive, experiences that would surely end up destroying those who lived them, if this form of aesthetic relief didn’t exist.

Lonnie Holley was born on February 10, 1950 in Birmingham, Alabama. From the age of five, Holley worked various jobs: picking up trash at a drive-in movie theatre, washing dishes, and cooking. He lived in a whiskey house, on the state fairgrounds, and in several foster homes. His early life was chaotic and Holley was never afforded the pleasure of a real childhood.

Since 1979, Holley has devoted his life to the practice of improvisational creativity. His art and music, born out of struggle, hardship, but perhaps more importantly, out of furious curiosity and biological necessity, has manifested itself in drawing, painting, sculpture, photography, performance, and sound. Holley’s sculptures are constructed from found materials in the oldest tradition of African American sculpture. Objects, already imbued with cultural and artistic metaphor, are combined into narrative sculptures that commemorate places, people, and events.

Holley did not start making and performing music in a studio nor does his creative process mirror that of the typical musician. His music and lyrics are improvised on the spot and morph and evolve with every event, concert, and recording. In Holley’s original art environment, he would construct and deconstruct his visual works, repurposing their elements for new pieces. This often led to the transfer of individual narratives into the new work creating a cumulative composite image that has depth and purpose beyond its original singular meaning. The layers of sound in Holley’s music, likewise, are the result of decades of evolving experimentation.